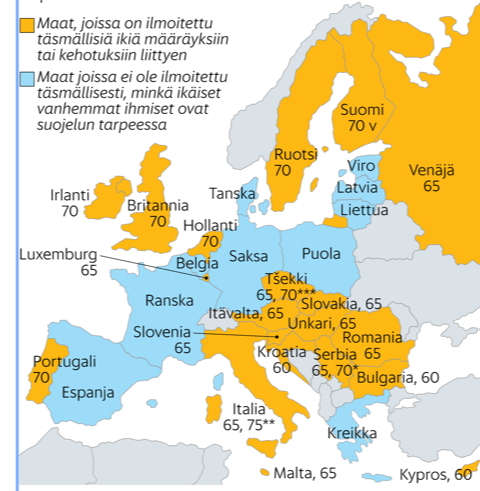 Our members of the board of green seniors actually all wanted to meet in Skopje in May – now it looks like we’re going to meet digitally. And we exchange ideas regularly to hear how everyone is doing in the different countries. Here comes a small excerpt from Finnland, Belgium and Sweden. Next more from Austria and Germany. And it would be great if you also wrote from other countries about how you are doing! I am totally isolatet in my summercottage in the archipelargo together with my partner. I have not gone by public transport or met anyone since 14 of March. We elderly can go to the shop for purchasing food in the morning between 7 and 8. I have not seen friends or relatives since February. In the politics we have reduced meetings as much as possible and the party meetings is taking place on telephone or Skype. Last saturday I was on two yearly meetings on computer. First 3,5 hours in the morning with Green party Stockholm and then 6 hours after lunch with Green party Stockholm Region. It was over 60 persons in each meeting. Very tiresome, I was exhausted for two days.
We do what we can to avoid the virus but we are not sitting inside all the time. We are walking every day to be in shape and we work in the garden. On TV we have got a gymnastik program every day half an hour an they send old films all the time.

“The situation with the pandemia prevails. In Sweden the curve for new incidents is flat and the situation in Stockholm is a bit better but we now have over 1000 dead with the middle age 59, 75% are men and 25 % women. Worse parts of Stockholm are two of the immigrant dense areas but that is not the fule in other parts. Now they have found virus in the waste water also and this is really scaring. I get a report every day from our cityadministration, both generally and for my part of the city. It is very sad to understand that the right safety equipment is scarce in the home care organisations and elderly homes. Most people who died are old and this is not uncommon with ordinarie fules eather but here it has to be due to bad instructions and equipment. Furthermore elderly in elderly homes with care are fragile already when they get into the homes. Most elderly are at home even if they are very old and need a lot of help both from home care and from the health care. Many get more than 25 different people visiting their home over a two week period. Yesterday, there were 64 corona-based deaths in Finland – the number is still low compared to many other countries but obviously still rising. Two thirds of deaths have occurred in care homes for the aged (!!)
The news of today is that the isolation of Uusimaa region will be lifted as from today 13.00, even if the great majority of deaths have happened in Uusimaa. The reason for lifting the restriction is mainly legal – the proportional difference between Uusimaa and other regions is not anymore big enough.
Even if the restriction is lifted, the Government strongly recommends that people not move or travel to Lappland or to their summer cottages. Fortunately the weather does not attract moves to summer cottages – from yesterday on it’s snowing even in Helsinki.
On the other hand: the travel restrictions to neighbouring countries have been tightened – so even the workers shuttling from and to Estonia have been stopped from Holy Thursday. The shuttle boats only transport goods and truck drivers.
The schools, kindergartens, restaurants, cafes and bars remain still closed. Also the meetings of more than 10 people stay prohibited.
Face masks are not requested nor prohibited, but the Government does not recommend the use of them. They are too risky and unreliable and normal people don’t know how to use them properly. The Belgian situation was not the worst situation, but not also the best. Since the 15 March we are in lock down and in a strict quarantine system !!

You can live your home only for a little walk (only or with max 3 persons from the same family),  to buy food or to go at your work (necessary – because the mainstream is to work by internet). We have a population of 11 million people with 1,3 million are temporary unemployed. Even in our country, elder people suffers more from the corona crisis. And now we have a  strong emergency plan in the retirement homes.  But it is clear that the poorest people and families are hardest hit. It is not easy to live in a small apartment with three adults and four children.

The situation has now stabilized. It seems that we have reached “the peak”. The quarantine period runs just to 15 April. But an extantion just to the end of April is probably.  However, normality will take a long time. Probably until September when the schools starts again. Travel will be allowed sparingly. And above 65 people will not be able to board the plane. Maybe people of other countries are allowed to travel (Austria, Denmark ??) , but it is sure that not every country will be ready on that time. We only have more clarity from April 15. But I’m afraid we won’t be able to travel before July.

As member of the urban sociale services of the city of Leuven, I was fully involved (and I still I am) in setting up urgent aid systems for this people. Fortunately, the population responded quickly with many volunteers. And most of them young people. In the meantime we learned to have regular meetings with videoconferences. (zoom and other programs).  And also with our children and grandchildren we are in contact with apps, video and together systems.

If you need a doctor, only by your homedoctor. He/she will indicate a hospital if you need. No shops, no restaurants, no theater or concerts, no hairdresser, and so on.

Presentation in Tampere: New Finnish Policy for the Elderly
previous
Mistakes in Finland and uncoordinated exit in Germany
next