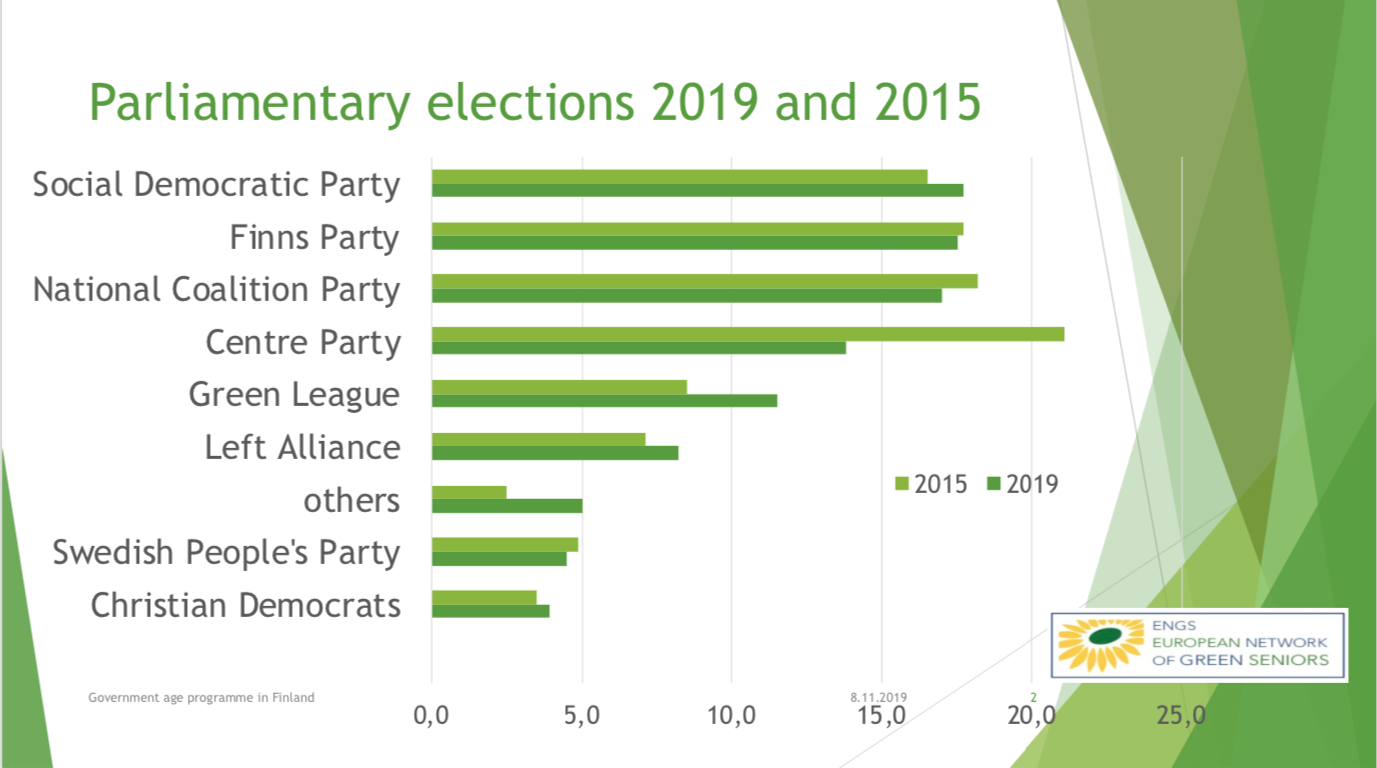 Reino Lampinen (photo on the right), Secretary of the Aged Greens in Finland, spoke at the fringe meeting in Tampere, alongside the 30th meeting of EGP Council, about the New Finnish Policy of Elderly. Here comes his presentation: The Greens in the Government The Programme starts with a very ambitious sentence:

“Climate change, globalisation, urbanisation, the ageing of the population and technological development are all transforming Finland and the world perhaps faster than ever before.”

Pledge for fair and equal treatment across generations

Older people are worried about the availability and quality of services and how they will be able to cope. … we want to guarantee a dignified old age for everyone so that nobody is left alone.

Attaining the employment goal requires measures that support the supply of and demand for labour and alleviate the labour market mismatch:

Employment of older people and others with poor employment prospects will be increased.

A socially sustainable and egalitarian EU

Decision-making within the EU will underscore the importance of measures against age discrimination and promote greater inclusiveness among older people and the notion of dignified old age.

Accessibility in the living environment, in services and in digitalisation, as well as lifelong learning and age-friendly work will be promoted within the EU.

Finland will be a more age-friendly society that recognises and prepares for the social effects of its ageing population.

Older people are not only service users; they are also an important resource in society.

The aim is to raise the number of healthy years, improve people’s functional capacity and secure efficient and timely services.

The Government will prepare a horizontal programme on ageing in collaboration with ministries, municipalities, third sector organisations and other actors.

The Government will bring the preventive measures against memory disorders in step with the prevention of other chronic diseases.

An office of an ombudsperson on older people’s rights will be established.

The Act on Care Services for Older Persons will be updated, and the scope, quality and effectiveness of services for older people will be improved.

A statutory minimum staffing level of 0.7 for care personnel in units providing 24-hour care will be enacted.

Care intensity will be used as the main criterion for determining appropriate staffing levels.

Most older people live at home, hence the quality and resourcing of home care will be developed

EUR 183 million will be used to increase the smallest pensions by around EUR 50 a month in net terms. The increase would be targeted at those whose pension is less than EUR 1,000 a month.

The increase will be implemented through the national pension and guarantee pension systems.

A tripartite review will be started on how to improve the status of pensioners with the lowest earnings-based pensions within the employment pension system. The review will also examine ways to introduce a net increase of EUR 100 to pensions that are less than EUR 1,400 a month without increasing the level of pension insurance contributions.

Plenty of promises – any achievements?

The new Government has already released bills and budget proposals in order to meet the promises.

A working group prepares a horizontal programme on ageing.

An ombudsperson on older people’s rights was included in 2020 budget.

Social and Health Ministry’s working group has prepared a draft bill to increase the staffing level on care personnel to 0.7 per patient in 24-hour care units.

Smallest pensions will be raised by EUR 50 a month – the money required is included in 2020 budget.

Money! Finland got a letter from the European Commission – the Finnish budget deviates from the recommendation of the Commission.

Politics! Not only Commission but also the opposition Parties in Finland will oppose vigorously some of the proposals.

Next elections! The monthly polls on the popularity of the parties show that the Finns Party has constantly increased its share, and in the latest poll had 23,0 percent of supporters.

You might be eager to tell us about programmes and plans in your countries!