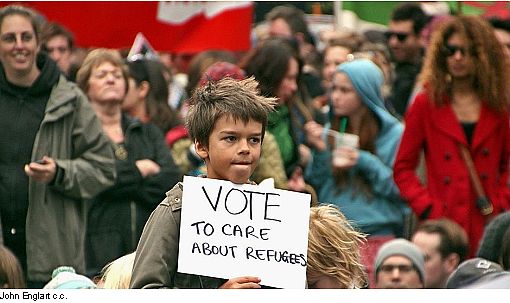 For decades, perpetual global wars have resulted in an endless stream of refugees who, in search of safety, have had to flee for their lives, with no hope of an end to their plight. Their homes bombed, societies and countries lie in ruins. Tens of millions are displaced, a fraction of them reach Europe in search of refuge and safer, better lives.

Ukrainians are the latest casualties, suffering a military invasion by neighbouring Russia.  This close proximity shakes us to the core. It is 21st century reality.  Europe for once is united in opening borders to Ukrainian refugees, treating them in line with both UN and EU conventions… We expect no less.

Despite persistent demands by NGOs, no such welcome is offered to refugees who have arrived in Europe from other war-torn countries of Asia, Middle East and Africa.  However, refugees from Syria, Afghanistan, Iran, Iraq, Nigeria, Somalia, Ethiopia and many other countries, are not afforded equal rights.  Quite the contrary, they are in fact not welcome at all.  Many are prevented from reaching safety due to lack of safe corridors to Europe.  They are killed on the way or drown at sea.  On land, they are subjected to forceful pushbacks by national police, Frontex and other military presences at razor-blade fortified borders, barring, men, women and children from safely entering Europe. Of those few who do manage to enter, only a fraction receive asylum within EU Member States. Deportations are ever-so common, thereby taking Human Rights Violations to new heights.

Whether from Ukraine or elsewhere in the world, human rights must apply equally, no matter a refugee’s nationality, culture or religion.

We – European Network of Green Seniors:

We demand, with immediate effect:

Equal Human Rights for All Refugees.

Everyone is talking about the climate: so are we!
previous
WHO: Age-friendly Mentoring Program
next