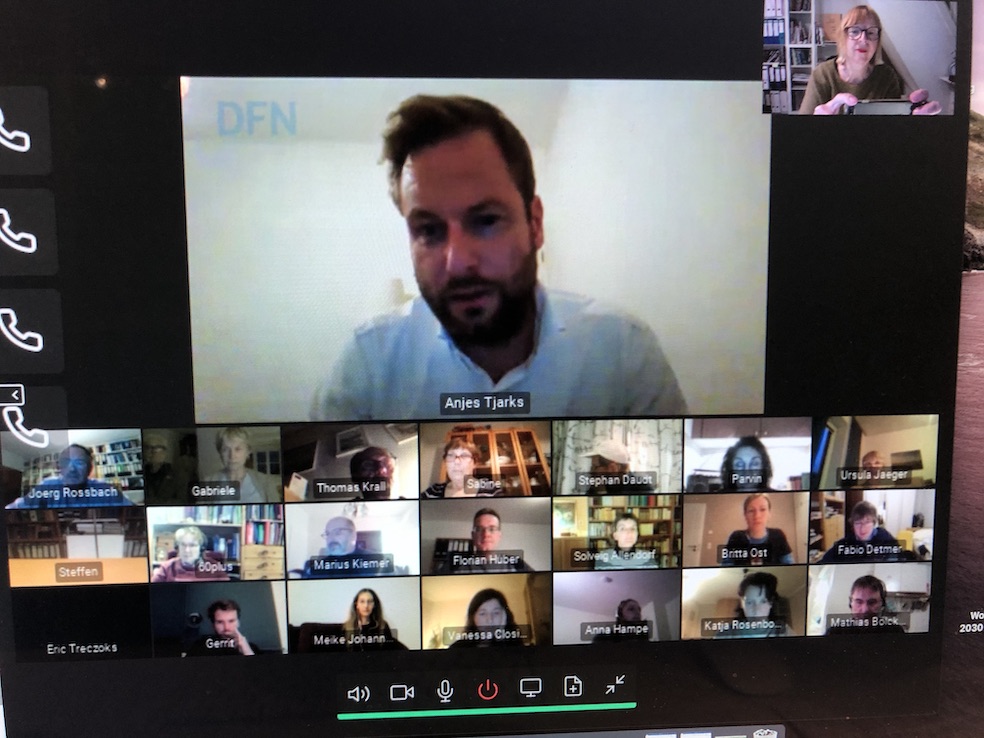 Recently, the Hamburg-based Green 60plus had a video conference with the State Working Group on Transport and Traffic – and our Green Transport/Traffic Senator Anjes Tjarks took part in it. The main topic was the Green 60plus bus paper – but at first there was an introduction by Christa Möller to age-friendly city and mobility:

What we want in general are: well-lit footpaths and wide cycle paths, longer traffic light phases, i.e. by individual chips that extend the traffic light phases, plans for fully accessible walks, age-friendly benches that are not only in parks, but on the daily paths, accessibility in transport, no stumble traps on the trails, but footpaths, which are regularly upgraded and a free HVVcard upon voluntary by giving back the driver’s license.

You can find our paper – in German – with the specific wishes for barrier-free, age-appropriate bus rides here:

The traffic senator sees many of our points already or soon implemented. What is still missing in our view is enough space for rollators and bicycles in the busses. Bicycles are important for older people, if they are not able to cope with part of the routes so well and drive a bit by bus, then continue cycling.

We learned that the introduction of an anonymous prepaid card, which can be used to pay at vending machines on the bus, is being planned. We are also working on a special check-in and -out offer that is billed via an app and always automatically calculates, which ticket is the cheapest for the journey to make.

In our opinion, the question of communicating with the drivers of busses has not yet been solved. There is a camera in the bus, but when someone with a walking disability enters the bus, that is not enough. Drivers often go too fast because they don’t notice the problems. This would be for example a special call button which so far is only available for wheelchair-users. That’s a good way to expand it.

And there should be more seats at the stops. So far often only three people can sit. In addition, the seats are very narrow and there are no backs which would make it easier to get up. We remain in conversation with our Green politicians.

Invitation to a videoconference on the UN world seniors day
previous
Why Age-friendly Cities are so important for the future?
next